skip to main | skip to sidebar

Air travel never ceases to amaze me.  In San Diego this afternoon, I'm getting ready to get on a plane going through all of the usual preflight rituals.  As I'm participating in this, the one thing that seems to consistently work in the air travel world, there are two things that get my mind cranking.
The lady checking our IDs and boarding passes has a name tag that says Sarin.  I'm sure that's her name, but I've got to confess it is a bit unnerving to look at the name tag of someone who is supposed to be protecting your security and read "Sarin."

Again, and I can't make this kind of thing up, there's a song playing somewhat loudly from the PA. It's about 1PM, and I'm pretty sure Muzak is running the "wake me up from my giant lunch" playlist, so we've got something peppy.  Hmm... 80s.   Funk/Disco.  Gap Band, yeah, definitely Gap Band.  I start tracking the lyrics... "you dropped a bomb on me...baby...you dropped a bomb on me." The only thing dropping in that TSA line was my jaw.
I truly hope this was someone's well-planned joke.  It was funny -- right in line with my sense of humor.  I needed the laugh this time as my bag was disassembled and given a good swabbing by a congenial TSA agent, whose name might have been Steve.
Guerilla marketers take note: you may want to pay TSA agents to pump your technology as they take apart peoples bags.  "Hey, how do you like the new iPod Nano?  I had one, really liked it, but got super-sick of iTunes.  I love my new Zune...check it out!  Next time you come through, I'll share a tune with you wirelessly.  Looks good, you can put your stuff back now."
Posted by Matt at 9:13 PM No comments: 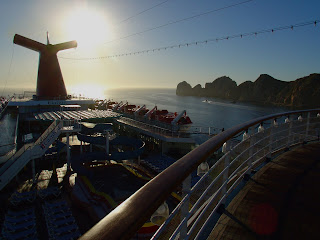 The ship arrived this morning before any of us awoke. Breakfast, final packing, cleaning up and getting out of the cabin was followed by an uneventful disembarkment.
Cruising is truly a state of mind.  Personally, I am an explorer.  I perfer to arrive somewhere, spend my time learning about and visiting places in that area.   Cruising doesn't lend itself to that.
First, you get your shore time in about 8-hour bursts.  There's a big push to go on an organized trip and without pre-planning (I didn't) it's pretty difficult to get much done, other than go on a tour or walk around the closest local area you can find.
Choose your poison -- organized tour or plan ahead.  In Cabo, we probably did it right.  A snorkeling tour (the water was about 65 degrees...I wear a wetsuit surfing in 62 degree water) which also ended up being a tour of Land's End, Lover's Beach and 15 minutes watching a humpback mother and calf.  Dos Equis, margaritas and nachos with cheese from a can that must have been labeled "7-11 surplus" made this a truly Mexican experience.  It was fun, and in the moment, I was able to fit in with that style of tourist just fine.
So, am I a cruising person?  Probably in the same sense that sometimes I'm a sit my butt on a beach chair at a resort person.  In the end, its just another type of vacation activity.  If you get your head in the right place, a Margarita in your right hand and a book in your left, you and the cruise will get along just fine.
Posted by Matt at 11:36 PM No comments:

Say your name. Say it quick. Say it slow. Say it over and over. Pronounce things you might not think to pronounce.

Spotted Friday night: A brand new van owned by the framing company A-N-S Brothers. Is that A 'n' S like Guns 'n' Roses? Maybe it rhymes with 'fans.' Maybe its just me.
Posted by Matt at 11:21 PM No comments:

Well, yesterday I was finally allowed to tell more people about my plans to leave Expedia.

I have the opportunity to take a break, study, learn new technology and ultimately perhaps develop a business idea and work on it.  If nothing else, a mid-career break and recharge can't be a bad thing. I'd better drop the "mid-career" thing now, or I'll be spending my break buying a Porsche.

A colleague of mine followed his dreams a couple of years ago. He wanted to make films. I admired him for taking a risk to do what he wanted to do. Since many dream of having a similar opportunity, I need to make the most of my time and opportunity.
Posted by Matt at 1:56 AM No comments:

You're buying a what? 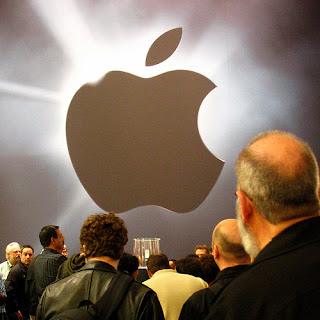 I'm shedding my PC heritage and buying a Mac.
It probably isn't appropriate to refer to a 'PC heritage.' I've been developing on PCs with DOS, OS/2 or Windows my entire professional career. When I worked with mobile devices, it was on Windows CE. but my heritage is System V and free software. It started with a the heaviest computer I've ever owned.
The Motorola VME/10 was a $10,000 workstation running System V on a Motorola VME bus architecture powered by the stunning 68010. Virtual Memory? Oh yeah!
I was lucky to have picked up two of these boat anchors for $800 or $900 from a guy who scored them from the ashes of a startup he was part of. They might have been his last paycheck. I'm sure they didn't fit in his wallet. For a guy at a University, having a UNIX workstation in your apartment...if that wasn't cool, I'm not sure what was. I'm pretty sure my wife didn't get what cool was, because she never really saw the point. Thanks Pete, I'm in your debt for having the coolest computer in school!
Anyway, when I got those machines, the first question was, what am I going to do with them? I had a K&R C compiler and, uh, well, did I mention the C compiler? I shouldn't forget vi, either. The first task was to get file transfer software. I pulled the Kermit sources from the internet by downloading them to one of the school machines and doing line capture until I had the entire set of sources. I then compiled and hunted errors until I had kermit.

After that, it was all go...JOVE, a spreadsheet, bison, flex, zmodem...all of the utilities so I could do my school work. I even had to generate a termcap for the display so I could dial into the university and use the workstation as a dumb terminal.

Effectively, the system was a blank slate, and I would tie up the phone line every night downloading source code and spend my afternoons and evenings studying and trying to figure out how to configure and compile the next thing I wanted. It was truly CS student heaven.
ANSI C was all the rage, and I couldn't turn my assignments in using K&R C, I went for the big thing. I started porting GCC 1.6. GCC 1.6 was my big challenge. The GCC code generator emitted the assembly in a different format than my assembler used. So, I hacked the output tables in hopes of generating assembly language my assembler could grok. After a few things that wouldn't compile, I did it... hello.o! Linked and loaded, my computer told me 'hello world!' and I rejoiced.
Now to build the assembler, rebuild the first stage compiler with the default 68010 tables, then build the optimized compiler, gdb and then...graduation.

PCs were the standard for commerce and shrink-wrapped software was king. System V took a back seat, and despite many tries, I never again was able to drive EMACS the way I did at the University. I shed my true heritage for the thing that would put food on the table.
Fast-forward to 2007. I'm running Ubuntu on my laptop and loving it. Ubuntu is so close to being something a consumer could use. It is litterally *this* close. I spend a bunch of time getting it working, and work it does on my old P3 Mobile. It works way better than Windows ever did, doing 3D desktop graphics and animations just like Vista might...if it could run on this hardware. Sadly, the laptop is old, the battery is dying and I need something with some kick.
The geek in me is loving having to do some of the stuff that no sane PC user would ever really want to do, for instance building drivers for my "rare" (read not valuable) net card. Get a free DB schema designer running, you know, all of the stuff that you could spend all of your time on but probably shouldn't.

To get a truly great laptop experience, you need the hardware vendors to want to spend time and money on drivers.
After looking at laptops that can run Windows and Linux, I realize that it costs $100 more for a Mac of similar class to the Lenovo I'm considering. Having a supported, battery-optimized FreeBSD OS with a very solid UI, plus the ability to run Ubuntu and Windows? In VMs? Macs can now run anything and the PC isn't quite everything anymore.

A new day has come, and I'm using the hardware from a company I thought was cool as a kid, but was never something I thought I'd want.

If all goes well, Monday is delivery day. I hope I find a right trackpad button in the bottom of the box! 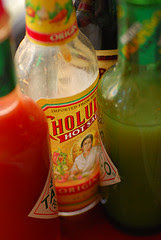 Part my current process is figuring out some sort of moniker. Something to call what I'm doing. Personally, I'm not a name-generation wizard. If left to my own devices, I'd try 'Pantium' or pantalones.com, maybe even something as silly as boopboop.org.

Truth be told, boopboop.org is my current personal/family domain name. For those who don't know, it has more to do with syrup dropping on pancakes (boop-boop-boop). Tapatio hot sauce is 'man boopboop', Cholula is 'girl boopboop'. It has nothing to do with Betty Boop. I guess that's what you get when you let a 3 year-old pick your domain name. It stuck and I'm not giving it up.

I attended a panel discussion on how to select investors for your startup the other day. I think I'm still a bit before that phase. Probably the most interesting thing about the morning is that the VCs are genuinely interested in hearing from you right away. I suppose I should have a good idea first.

It seemed like the key to beginning a relationship with the VC community is to use that opportunity to build a track record of success. Effectively state your next steps, your goals and metrics and demonstrate that you can meet the goals you set -- even if you're not asking for money.

What you get from your investors, other than money, is important too -- don't just sell yourself, check up on your investors and groups they've invested in in the past. You've got to live with the people you choose, and chances are at some point you'll be working in difficult circumstances with them. Pick people you can work with who add value to your company.